This blog recently had a chance to catch up with Julito, independent and dissident rapper from the duo El Primario y Julito, who spoke to us about the group’s new record, an opposition rap agency, the difficulties independent artists face in Cuba and more.

The dissident hip-hop group El Primario y Julito, based in Havana, recently launched their new album titled “My Crime” [‘Mi Delito’], a production which contains 14 songs, among them the first single “Lambon”, which has been accompanied by a music video.

Julio Leon Fonseca, better known as Julito, explains that “My Crime” is one of his favorite projects to date.  It consists of a number of “protest songs” and others which are more “commercial and reaggaeton-based“.

“This agency consists of 5 rappers who are not allied with any government organization and we work completely independent because we are members of the opposition“, says Julito, “The agency is made up by us – Primario y Julito – and also Rapper Issac, from Santiago de Cuba, and The Unwanted Children, from Bayamo“.

The young musician highlighted the situation of Angel Yunier Remon Arzuaga “El Critico”, a member of The Unwanted Children, who has been arbitrarily detained for more than 2 months, being held in Las Mangas Prison of Bayamo, for making protest music and carrying out civic activities as a human rights defender.

“Some artists affiliate themselves with certain musical or cultural groups belonging to the government, but we don’t buy that“, expresses Julito, “we make protest music and we have absolutely nothing to do with government agencies.  If we are going to protest, we will do so with our means, not with theirs“. 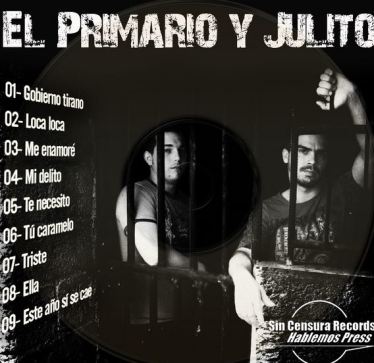 He adds, “in reality, this is not a government… it’s a family dynasty which took over the country and has not wanted to let go. This country, this government, has to change…or better said, this government has to cease existence“.

Some of the other 14 new songs are “Gobierno Tirano” [‘Tyrannical Government’], “Triste” [‘Sad’], “Malo” [‘Bad’], and “My Crime“, which is the title track and recounts how the regime classifies these musicians as being dangerous because they write lyrics critical of the system and publicly manifest their opinions without censorship.

This free attitude has cost independent artists on the island quite some reprisals.  Julito says that in the case of his group, “we have been beat, we have been arrested and we’ve been completely censured“.  In fact, Primario y Julito also go by the name “Los Censurados”, (‘The Censored Ones’).

“When we started making music as a duo and we launched our first disc, we were summoned various times by the political police.  While in the police units, agents told us we would not have access to any stage and that we would not be allowed to perform live“, recounts the Havana-based musician, “In fact, I still haven’t been able to perform live because of this.  And it’s something I have always wanted to do as an artist, to see how the crowd reacts to my music.  But these things happen under dictatorships“.

Despite the censorship and the prohibition of not being able to present themselves publicly, Primario y Julito still have lots of followers.

“There are many people who listen to us, who know who we are out on the street, especially young people“, assures Julito, who also explains that in order to spread their art, they have to do so through their own means, “burning CDs and handing them out to the population“, while “opposition groups also help us spread our work throughout the country“.  In addition, they have to do record in “home studios” which other musician friends lend them.

He points out that an efficient way to assist artists like them in Cuba is to facilitate their access to blank CDs and USBs.

“Our discs are not on sale in Cuba“, says Julito, son of well known dissident and Lady in White Sara Marta Fonseca Quevedo.  However, anyone can buy the new album on their website, www.elprimarioyjulito.com.

“Here we are“, expressed Julito, “My message to other young musicians like us in Cuba is that they join us to keep taking the sentiment of freedom to the people.  Here I am…and we have to keep fighting without fear and taking this protest music against the dictatorship“.

2 thoughts on ““My Crime”, Making pro-freedom music under a dictatorship”