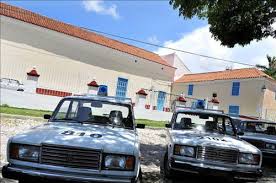 The young Lady in White Yusnaira Gonzalez Perez, from Santiago de Cuba, recounted during the morning hours of this Wednesday, April 3rd, that she and her relatives lived through some disturbing moments when two officials of the National Revolutionary Police (PNR) interrupted the funerary services of her grandmother at The Caney Funeral Home (Santiago de Cuba) to summon and assault two of her cousins.

“We were all here in the wake when the PNR officials came in to arrest my cousin Marcos“, explained Yusnaira, “they summoned him to a police unit and they tried to take him…they assaulted him, they pushed him…and they did the same to his brother“.

Ana Celia Rodriguez, another Lady in White present in solidarity with the family, says that despite the painful moment for the deceased relatives, they responded with “bravery“.

“The relatives…started shouting ‘Down with Fidel’ and ‘Down with Raul’ to the point that the police agents had to stop harassing the brothers. I was very impressed with the bravery displayed by this family, despite all the pain they were going through at that moment“.

On her part, Yusnaira Gonzalez was not able to identify the PNR officials by name but did write down their license plate numbers. They are #24651 and #23519.

“I want to point out that this was very disrespectful, to come to a wake to do this to us. My cousin was out on the street earlier and they chose to do this now“, said the Lady in White.

Although the agents left the scene, the fate of this family is still in danger, considering that they may be assaulted upon leaving the funeral or upon returning to their homes.