Closed streets, diverted traffic, countless police vehicles, agents dressed in civilian clothing, and a wave of arrests.  That was how the operation of the Cuban regime against the Ladies in White looked like this Wednesday, February 13th, when women from throughout all the provinces of the country set out towards their national headquarters in Havana to pay tribute to Laura Pollan– deceased leader of the group-who would have turned 65.

Despite the repressive measures, the Ladies continued onward with their plans to celebrate the date.

Since the morning hours, former political prisoner Angel Moya Acosta published a series of Twitter messages detailing what was happening with these women.

“Repressive forces are stationed on the streets leading to the headquarters of the Ladies in White on Neptune Street”, read Moya’s first tweet.  The activist continued to describe the presence of numerous “police and private vehicles” ready to arrest any of the women who would try to arrive to the encounter.

At around 9 AM, there had already been 5 confirmed arrests of Ladies in White.  Just minutes later, the number rose to 27.  Throughout the day, many more arrests were confirmed.

Two of the detained women were Sara Marta Fonseca Quevedo and Yanelys Cabrera who set out from Boyeros (Havana) towards Neptune Street.  The arrests were violent.

“I received physical blows on my head, back and arms.  I am dizzy”, tweeted Fonseca Quevedo upon being released minutes later.  “Police vehicle # 570 left me in a desolate area in the municipality of Lisa”, added another message, but Sara Marta assured that she would head out again towards the meeting to “carry out her her right to freedom of peaceful association and assembly”.

In that second attempt, Sara Marta and Yanelys were once again detained.

Despite all the police cordons which kept dozens of other women from arriving to the event, more than 50 Ladies in White were able to participate in the encounter in honor of Laura Pollan in their headquarters.

Once the event came to an end, the repressive measures only increased.

When a group of 29 women from the Eastern provinces set out to the bus terminal known as “La Coubre” that night to board a bus to head back home, the transportation never showed up.  Hours passed and the situation remained the same, until Berta Soler and Angel Moya head out from their homes and showed up at the terminal in solidarity with the women.  Also present was Patriotic Union of Cuba (UNPACU) activist Osmany Cespedes Napoles.

The total of 30 women- 13 from Santiago de Cuba, 11 from Holguin, 3 from Guantanamo and 2 from Villa Clara (as well as Berta Soler from Havana)- decided to carry out a peaceful protest at around 2 AM in front of the terminal, shouting slogans such as “We want transportation”.

(Ángel Moya published this video of the protest):

The result of the protest was the brutal arrest of the 30 women, as well as of the other activists present, Angel Moya and Osmany Cespedes.  Radio/TV Marti published a detailed video-report of what happened with the activists.(In this video published by ‘Hablemos Press’, Ladies in White express their discontent regarding the lack of transportation).
The young activist Anyer Antonio Blanco, from UNPACU, informed that his mother, Lady in White Ana Celia Rodríguez, managed to establish communication with him during the moment of the arrests.  Ana denounced that all the women, including herself, were being violently beat and Anyer heard screams of “Long Live Laura Pollan”.
At around 2 AM, the Ladies in White and other activists were detained and transferred to undisclosed locations and it was during night hours on Thursday and morning hours of Friday that they started to be released and/or deported. All these arbitrary actions against the Ladies in White between the 13th and 14th of February occurred because these women were paying tribute to Laura Pollan when she would have turned 65.  The same regime which lead Pollan to her death can’t tolerate that her legacy be celebrated.  Regardless, as Angel Moya tweeted:”Do not doubt it, the repressive operations set out through Neptune St in Havana prove the moral strength of the Ladies in White in Cuba”. 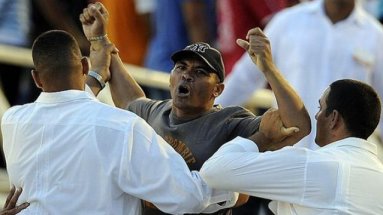 Andrés Carrión Álvarez, the Cuban who shouted ‘Down with Communism’ during the papal mass in Santiago de Cuba this past March, and who is also a coordinator of the Patriotic Union of Cuba (UNPACU), is still on hunger strike, according to the national coordinator of the mentioned organization, Jose Daniel Ferrer Garcia.  With his protest, Carrion demands the return of numerous belongings which were recently stolen from him by the political police.  He is also denouncing the increased level of repression against members of the internal Cuban opposition.  As of this Saturday, June 23rd 2012, the activist has been on hunger strike for 13 days and is already starting to suffer some serious health complications.

“Carrion is feeling very bad.  It is the first hunger strike he carries out,” explains Jose Daniel Ferrer Garcia, “he is currently carrying out his protest from bed, he feels very weak, with very strong pains.  Relatives and members of UNPACU and other opposition groups are very worried about his health“.

Carrion Alvarez is carrying out his protest in the Vista Hermosa neighborhood, located on 5th Street, #6 in the city of Santiago de Cuba.  According to Ferrer Garcia, this location is the “headquarters of the Wilman Villar Mendoza cell, which is an extension of UNPACU“.

During afternoon hours of this 23rd of June, another coordinator of UNPACU, Ovidio Martin Castellano, made an urgent call to the ‘Hablalo sin Miedo’ website, informing that in that same headquarters of the Wilman Villar Mendoza cell, where numerous activists were congregated to show solidarity with Andres Carrion Alvarez, was surrounded by the political police, which was carrying out an act of repudiation and was threatening to raid the home.

Just minutes later, the human rights activist Osmany Cespedes Napoles also left an urgent message on ‘Hablalo sin Miedo’, denouncing that the police forces finally did raid the home, taking Ovidio Martin Castellano and 5 other dissidents with them.  According to Napoles, the 6 detainees were taken by agents of the National Police and of the Special Brigades, under orders of agents Brito and Dorky.  They were mounted on buses and taken to an undisclosed location.  As of now, their whereabouts are still unknown.

For more information from Cuba: