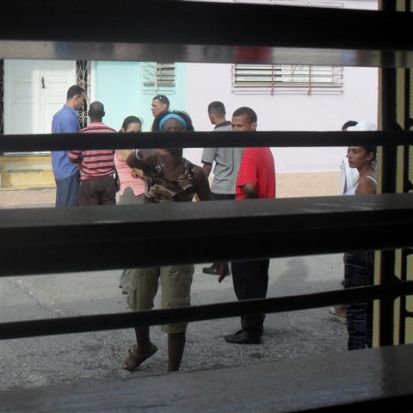 Members of different opposition groups were targets of acts of repudiation this past June 18th in the municipality of Gibara, in the province of Holguin.

Gabriel Arcángel Martínez Leyva, director of the Republican Party of Cuba in the mentioned municipality, said that the actions – organized by functionaries of the regime – began at 7:30 AM and ended near 12 in the afternoon.

“An act of repudiation was carried out around the home of Trinidad Rodriguez.  Agents of the Rapid Response Brigade, the political police and of the National Revolutionary Police surrounded the house“, explained the activist, “it was a total of about 30 or 40 people who were shouting at us and threatening to beat us if we stepped out of the house.  This happened because we had plans to go to the Gibara Terminal to travel to the town of Velasco“.

‘Acts of repudiation’ is the name given to the situation where the Cuban government organizes groups of people who shout offenses and threats at dissidents outside their homes.  Many times, the actions end in house raids and the vast majority of its participants are members of the regime.  Very few times do activists confirm the participants as neighbors, and when they do, they are usually drunkards or criminals.

Martinez Leyva considers that the persecution and harassment are due to various social projects that are being carried out in the area.

“This happens because of some projects carried out by the Republican Party of Cuba and by FLAMUR for the benefit of all Cubans“, said Martinez, “among these projects is ‘One Currency’ and ‘Increase and Lower’“.

The latter of the initiatives demands the totalitarian system to increase salaries of Cuban workers and lower prices of products and services of basic needs, like food, clothing and transportation.

Acts of repudiation also took place at the same time against other activists, among them Ylienly Aguilera Santos and Arselio Osvaldo Cruz Velazquez, members of the Patriotic Union of Cuba (UNPACU) in Gibara.

Repression against other members of the opposition in the province of Holguin have increased within the last months.  The Ladies in White in the area have also been denouncing these situations.

For example, Berta Guerrero Segura, representative of the Ladies in White in that province, has said that State Security agents arrest a number of women each Sunday so that they do not make it to Mass, while other members like Gertrudis Ojeda Suárez (in the municipality of Banes) and Mildred Noemí Sánchez Infante (in the municipality of Antilla) have backed up these claims, seeing as they are some of the women who are quickly arrested by the political police when they step outside of their homes each Sunday.