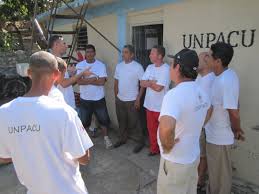 José Daniel Ferrer García, leader of the Patriotic Union of Cuba (UNPACU), informed this blog about various cases of police repression against dissidents  on the island but also highlighted that “not all news is negative“.  He affirms that his organization, as well as the opposition in general, continue gaining space amongst the population and keep putting the dictatorship in very difficult positions.

“Among the positive news, we see that there are more places where new chapters of UNPACU are opening up, such as in Santiago de Cuba, Holguin and other areas in Eastern Cuba“, affirms Ferrer, “and each time there are more people who join or collaborate with our struggle.  We are also imparting workshops where we train citizens to be more effective when it comes to communication with population, as well as in confronting the repression of the tyranny“.

Due to the growing level of activism, Ferrer Garcia says that the number of political prisoners has increased.  These prisoners are mainly young activists who decide to go out to the street and it is these same citizens, according to the former political prisoner, that worry the regime the most, considering that they attract more people and speak in terms understood by everyday people.  One of these dissidents is independent rapper Angel Yunier Remon Arzuaga, ‘El Critico’, who also serves as secretary for UNPACU in the province of Granma.

“We are still very worried with the situation of Angel Yunier, who has been imprisoned since March 26th [after he gave a public discourse in favor of freedom].  In addition to the constant tortures and harassment he is subjected to, Yunier contracted cholera in Las Mangas Prison…it’s very worrying.  He is a young man who is arbitrarily imprisoned“, denounced Jose Daniel.  He also pointed out the situation of Alexander Otero Rodriguez, another young dissident, arrested alongside Angel Yunier in march.  His discourses in favor of freedom and his constant public activism has been another thorn on the side of the system.

Recently, independent news agency ‘Hablemos Press’ reported that Alexander suffered a paralysis in the prison he is being held in while the authorities refused to transfer him to a hospital.

“I also want to shed light on the case of Francisco Diaz Echemendia, from Santiago de Cuba.  He was one of the ones who went to Bayamo to the place where Oswaldo Paya and Harold Cepero died.  He went there to deposit flowers on the first anniversary of their deaths, and for this reason he was detained.  The police searched his house and kept him in a dungeon for 10 days, in inhumane conditions and under constant threats, etc“.

In a similar fashion, activist Denis Pino Basulto was detained in Holguin province for defending various independent street sellers who were being harassed by the political police.  The agents were taking their products and threatening them.  “Denis was beat and detained for various hours, but despite the excessive repression he maintains himself firm and committed with the cause“, said Ferrer.

Returning to the subject of positive news and growing public opposition, Ferrer Garcia assures that “on a daily basis, more people committed with the cause are taking to the streets, and they are taking audio-visual materials on CDs and USBs so that the population can become informed“.

These discs and flash drives usually contain images of pro-freedom demonstrations on the island, debates, protest music, and interviews with Cubans in and out of the country, among other things.

In response to the question of the role of these informational materials in the struggle for freedom, the activist expressed that “we always say that our grand problem is information.  If we could maintain a constant flow of uncensored and serious information, through the use of audio-visual works handed to the everyday Cuban population, if we can do this a lot more, then the mentality of citizens would evolve quicker in the process of assuming consciousness in this struggle“.

“That way“, affirms Ferrer Garcia, “more people would join the struggle for freedom.  And the dictatorship would last much less time“.