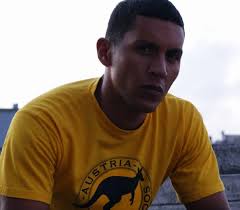 The musician, who is a member of the hip-hop duo The Unwanted Children and of the opposition group Patriotic Union of Cuba (UNPACU), is suffering from “chronic gastritis” according to Yudisbel, who assures that the authorities “are not giving him any kind of medication, nor are they giving him medical exams.  We do not know if he has an ulcer or not“.

The young Cuban mother explains that since Angel was arbitrarily imprisoned on March of 2013, his jailers told him that they would tend to his medical problems but it has been false.  “The culprits are State Security“, said Yudisbel, “these agents robbed all the documents having to due with the health of Angel, myself, and our child…they were all disappeared and they have not carried out any exams.  It’s a form of punishment against Angel because of his rebellious posture“.

During the month of July the dissident contracted cholera in prison and was brought down to a very delicate state of health.  Although he is now recuperating, he has expressed that the conditions of extremely poor hygiene in the prison may lead his health to worsen again.

Meanwhile, both Angel and Yudisbel have been receiving threats and blackmail in and out of the prison at the hands of the political police.

“During my most recent visit with him, they took me into an isolate room where there were various State Security agents.  They told me that they were going to be present during the visits from now on, listening to everything we were talking to“, denounced the young Cuban.  But the dissident couple did not remain silent.  They carried out a protest and various common prisoners joined in solidarity.

“We both told agent Javier, the main agent of Las Mangas Prison, that we were not going to accept a visit like that.  We protested.  Some prisoners joined the protest.  They all said that it was not fair that Angel was being treated like that“.

As a result of the protest, the authorities allowed them a ‘normal’ visit, but the threats continued against Yudisbel when she left the penitentiary.

“Once I left the prison they subjected me to a body inspection but they did not find anything“, recounts Roseyo, “afterward, a vehicle with State Security agents followed me all the way home.  I was on a motorcycle when the agent known as Allen tried to crash into me with his car.  I started to argue with him, denouncing what he had done.  He simply responded to me by saying that he was going ‘to take me’ and told me to leave my husband.  He said that if I didn’t do so he would do it for me because ‘he had the power to do anything‘”.

“The agent then told me that he was protected by the law and, therefore, was the authority“.

Yudisbel Roseyo affirms that neither her or her husband will give in to the constant threats.

“Despite the conditions in which they are keeping Angel Yunier, and despite all the punishment he is subjected to, we are never going to give up on our ideas.  The threats and the intimidation by State Security are never going to force either of us to give up, not now and not ever“, she said.

Yudisbel added that ‘El Critico’ will keep writing protest lyrics from behind the bars.

One thought on “Imprisoned rapper suffering from health problems, his wife continues being threatened”