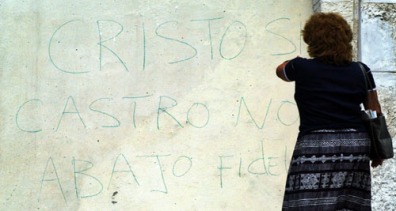 A number of signs with messages in favor of the everyday people and against the Cuban dictatorship appeared in different parts of the municipality of Antilla, Holguin province, this Sunday June 9th.

Mildred Noemi Sanchez Infante, a member of the Ladies in White and also of the pro-freedom groups Eastern Democratic Alliance (ADO) and the Patriotic Union of Cuba (UNPACU) said that the majority of the signs read “Down with Hunger“.

She explained that the mentioned slogan is something which demonstrates the discontent and desperation of the citizens on the island, as well as one of the main concerns of Cubans: finding food.

Among the places where the signs appeared was the popular cafeteria known as “La Popular” located in Maximo Gomez Street and on the walls of the Cuban Women’s Federation office on Maceo Street.  These said “Down with Fidel”.

Sanchez Infante said that the apparition of the signs led the National Revolutionary Police to worry.

“The PNR agents quickly showed up and erased the signs on the Federation’s office“, said the activist, “the messages reflect the true feelings of the people of Antilla“.

Sometimes, signs are hung by members of the internal opposition while other times they are placed by neighbors and everyday citizens who express themselves in this manner.

Other common messages on the signs are “Down with Unemployment”, “Fair Salaries”, and “Food for our Children”.