Just hours before Pope Benedict XVI arrives in Cuba, this blog will continue publishing statements of numerous Cuban dissidents and activists about his visit to the island. The question is: Now that the cameras of the world will be focused on Cuba: what message would you send the Pope and the world? 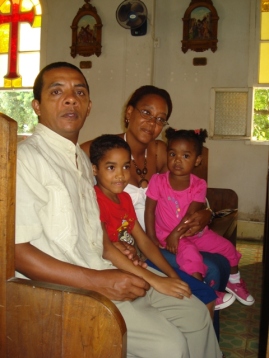 “My message to His Holiness Benedict VXI is that, when it comes to Cuba, may you hear the voice of a people and understand that there is a world of pain, that is, a world of persecution for political reasons, on the grounds of sexual preference, for ideological reasons and for many other reasons.
There are a great number of people within that world of pain, and we are those who cannot live a  normal everyday life because we are fired and expelled from our work. There is also a group of sick people, of people dispossessed of every kind of right, in Cuba. This is the world of pain and we ask you, as you are coming on a pastoral and spiritual journey, that you hear us, that you see us, that you help us at least to tell the world that we exist. That is a Christian message, he should not forget that”.
Luis Felipe Rojas made these declarations on Friday, March 23rd.  He was arrested as part of a large crackdown of dissidents on Saturday, March 24th.  There are not many details available on his whereabouts, considering that the phone of his wife, Exilda (pictured above alongside him and their children) has been blocked and many other dissidents from their small town of San German have been detained as well or have also had their phone lines cut.  The only thing confirmed is that his family is under house arrest, under orders that they cannot step out to the street.