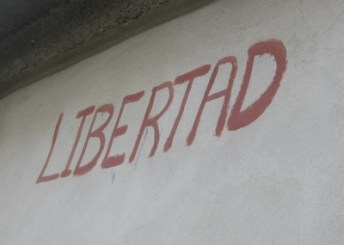 All the way from Palma Soriano, the former political prisoner of conscience Jose Daniel Ferrer Garcia is informing that more and more anti-government signs keep propping up throughout that municipality and many other areas of Eastern Cuba.  In the case of Palma Soriano, Ferrer explains that one of the spots where the most signs have surged has been in “the neighborhood known as Nueva Palma, and because of this the political police feels the need to blame someone“.  In this specific occasion, the police has chosen to blame Daniel Quezada, a young dissident who has been detained (for this reason) in a dungeon of the Castro regime for one week now.  In fact, Quezada has chosen to carry out a hunger strike in demand of his liberation.

Although Quezada is being accused of authoring the signs and putting them up, Ferrer Garcia points out that while he has been in jail “the signs keep popping up“.  Quezada is being held in the National Revolutionary Police Unit of Palma Soriano and, according to various testimonies of dissidents who have recently been released from that punishment center, he has suffered a number of brutal beatings due to his pro-democratic posture.

Meanwhile, Ferrer Garcia has informed that three members of the Resistance and Democracy Movement (affiliated to the Patriotic Union of Cuba) have also been arrested.  They are Rogelio Tavio, Niorvis Rivera, and Elmes Figuera who were all arrested by the political police this past Friday, March 2nd, while they were at the home of Tavio.

The arrest took place after these three did not allow the Cuban G2 (State Security) to use their children for acts of repudiation against non-violent dissidents.  According to Twitter messages published by Jose Daniel Ferrer, the whereabouts of Elmes Figuera are unknown but it has been confirmed that Rogelio Tavio has been taken to the provincial prison while Niorvis Rivera is being held in the Imias Unit.

“According to the political police, two of these activists will be processed“, said Ferrer.  Those two are Tavio and Rivera, both under the accusations of ‘public disorder and for attempting against child development’

Meanwhile, a dissident from the UNPACU- Juan Carlos Vazquez Osoria– was violently arrested this past March 6th  as he was traveling from Moa to Palmarito de Cauto.  Osoria was detained until March 8th.  Within the past few months, Osoria and has wife Anni Sarrion Romero have suffered countless acts of aggression at the hands of Cuban state police.  In fact, Sarrion has been beat, threatened, and suspended from her job just for publicly demanding freedom for Cuba.

For more information from Cuba: