Just weeks before Pope Benedict’s visit to Cuba in March, another Sunday on the island- February 5th 2012-  was marked by an excessive level of violence on behalf of the dictatorship against the peaceful Resistance, for simply trying to attend church.

In the city of Holguin, 5 Ladies in White were brutally arrested around 9 in the morning as they tried to reach the Jesus Christ Redeemer of Men Church.  The women arrested were Caridad Caballero Batista (Holguín), Marta Díaz Rondon (Banes), Isabel Peña Torres (Holguín), Berta Guerrero Segura (Cacocum) and Gertrudis Ojeda Suarez (Banes).  The 5 head out from the home of Caridad Caballero, despite the fact that the entire neighborhood had been surrounded by agents of the political police and the Rapid Response Brigades for various days.  Caballero Batista explained that the arrest occurred “just 4 blocks from my house” and consisted of a “very violent operation“.

“There were various police vehicles, motorcycles, uniformed officials and more, all under the direction of the State Security officials Douglas Torres Pupo“, said Caballero.  The agent Torres Pupo was one of the henchmen who would constantly attack Reina Luisa Tamayo (mother of the fallen Orlando Zapata) in Banes and other areas of Eastern Cuba when she would try to march towards her son’s tomb or participate in any other dissident activities.  In addition, the independent journalist and Lady in White points out that “the operation consisted of female and male police officers, officials from the Ministry of the Interior, and they all applied immobilization headlocks on us, they shoved us, and even kicked us“.

After the brutality, the 5 women were violently introduced into police vehicles and then taken to the Instructional Unit of Pedernales, better known by those who pass through it as “Everyone sings“.  As this arrest was occurring, in another part of Holguin the Lady in White Adis Nidia Cruz was also aggressively detained as she tried to make it to church.  Cruz was also taken to Pedernales.

The total of 6 Ladies were confined to torture cells, which, according to Caballero, are “completely sealed off, with bad odor, and full of insects, roaches, and rats“.  During this temporary imprisonment, the women were threatened on multiple occasions.  During one of the threats, recounts Caballero, the Cuban Counter Intelligence official Eduardo Rivas Noreiga- a very corpulent and tall person- “aggressively threatened us; he told us that what we were doing of trying to go to church was not going to be allowed by them, to which we responded that we are Christians and we will continue, and if they do not let us go to church, well then we will continue to see each other in Pedernales.  Noriega told us that our choice would bring us serious consequences for our lives“. 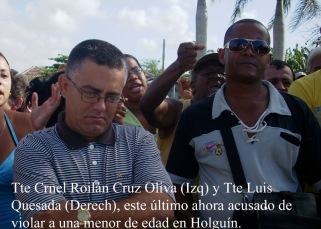 Another agent responsible for the violent operation and the threats was Major Roilan Cruz Oliva, also one of the main culprits of the death of Orlando Zapata Tamayo in 2010.  Caridad Caballero denounces that “Roilan was the main assassin who sent Zapata to the prison known as ‘I lost the key‘, and he had Zapata’s life in his hands there, and he chose to let him die. This man is the one who took Zapata to his death and he was also part of the operation this Sunday, February 5th“.

Despite these violations, 10 Ladies in White from Holguin successfully assisted mass in the Jesus Christ Redeemer of Men Church- that’s 6 more than last Sunday when only 4 were able to make it.  Meanwhile, Caballero Batista highlighted that 20 human rights activists from Holguin marched to the local State Security headquarters, located in front of the San Jose Park, and demanded the freedom of the 6 women behind held.  “After their protests, they began to release us at around 3 in the afternoon“, said Caballero.

Also released was Franklin Peregrino del Toro, husband of Berta Guerrero, who had been arrested since Friday, February 3rd, when he was on his way to his mother-in-law’s house in Cacocum to pick up his young daughter. It was around 9 pm when the arrest occurred.

“State Security arrested Franklin with the intent of producing fear in Berta Guerrero so she would change her mind and not participate in activities as a Lady in White, and so she’d return home” , denounced Batista, “but despite this degrading method, Berta did not give in to the manipulation and participated with us in the end, something which hurt the regime very much“.

Caridad Caballero Batista, Marta Díaz Rondon, Isabel Peña Torres, Gertrudis Ojeda Suarez,  Adis Nidia Cruz, Berta Guerrero Segura and Franklin Peregrino del Toro are just some of the names of brave dissidents who are violently attacked by the dictatorship Sunday after Sunday (as well as any other day).  Despite all this, they also represent the persistence of the Cuban opposition- that Resistance which stands firm and unbreakable in the face of so many macabre methods.

In Guantanamo, 11 Ladies in White were able to make it to church, despite a constant vigilance.  Another 20 Ladies in White assisted mass in the Santuary of El Cobre in Santiago de Cuba.  16 women were arrested as they tried to get to that mass, however, according to the Twitter account of Jose Daniel Ferrer Garcia (@jdanielferrer).  Among those arrested, according to his Twitter, were Oria Casanova who was “violently arrested, dragged, and beaten by 4 oppressive agents” and Liudmilla Cedeno who was victim of “sexual harassment in the cell where she was being held“.  Ferrer Garcia denounced, also through his Twitter, “that is how the henchmen who sustain the Castro brothers are- they beat, sexually assault, and harass defensless women in Cuba“.

In Cuba, the Ladies in White and other pro-democracy activists will continue marching, whether Pope Benedict publicly speaks out for them or not.

8 thoughts on “As Pope Benedict’s Visit to Cuba Nears, Another Sunday of Repression on the Island”