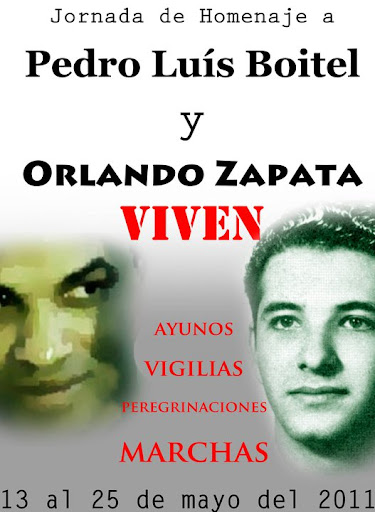 The Boitel-Zapata Live On Protest began on May 13th and culminated on the 25th. The objective of this annual protest has always been to pay tribute to Pedro Luis Boitel, and this year it also had the purpose of marking the birth of Orlando Zapata Tamayo, both dissidents who were murdered by the Cuban regime.

From the moment the protest was announced various anti-government activities took place throughout the entire island. The protest kicked off with a “pots and pans” demonstration (where participants ring their pots and casseroles with spoons and sticks) in Placetas and continued on with much solidarity and many demonstrations, and also with a high level of repression against each participant of the protest.

The Cuban Democratic Directorate is reporting on their web page that dissidents Jorge Luis “Antunez”, his wife Yris Tamara Perez, and activists Idania Yanez and Alcides Rivera Rodriguez were all violently arrested in Placetas after they all participated in a public march. According to the report, Yris Tamara Perez was then taken to the hospital in a state of unconsciousness after her brutal arrest. Afterwards, three other activists arrived to the hospital to check on Yris but were quickly arrested in the same manner.

In Pinar del Rio the dissident Raul Risco Perez explained, also to the Cuban Directorate, that various activists from the zone also carried out a “pots and pans” protest to mark the conclusion of the tribute, only to quickly be surrounded by political police agents in a matter of a few minutes.

In the early morning hours of the 25th Jose Daniel Ferrer Garcia was reporting through “Hablalo Sin Miedo” (an automated voice message system which allows dissidents to record denouncements of acts of repression against them) that an oppressive crackdown was unleashed on numerous dissidents in the Palma Soriano area. Various mob attacks and arrests would later occur here.

In the afternoon, the Eastern activist Marta Diaz Rondon walked to the cemetery where the remains of the Cuban martyr Orlando Zapata Tamayo reside, in order to take a floral arrangement and to pray for his soul. We were able to speak to her for this blog.

“A repressive crackdown has been carried out against all peaceful dissidents in Cuba. During morning hours the homes of various dissidents were surrounded. Here in Banes, Ariel Cruz Meneses and Rafael Cruz Meneses were both detained as they were walking towards my house. Ariel was beaten and they fractured his forehead; all of this was done by the political police“, explained Diaz Rondon.

Upon seeing such a heavy police presence in her town of Banes, the activist had to travel clandestinely to the cemetery, walking through high grasses and sugar cane fields under the scorching summer sun. Fortunately, after having walked various kilometers Diaz arrived to the cemetery. “Once there, we deposited our floral offerings and screamed ‘Zapata and Boitel Live’, ‘Juan Wilfredo Soto Garcia lives’, Down with the Castro dictatorship’, ‘Long live human rights’, ‘We are all Resistance’, and ‘The streets belong to the people’. We then prayed before the tomb of Orlando Zapata Tamayo. We were there for a while and returned in the same fashion, hiding because there was a strong police operation in the cemetery. But thank God we were able to make it“.

On the day before, May 24th, Marta Diaz was also detained for trying to make it to the trial being held in Holguin against two young men- Marco Limas Cruz and Antonio Limas Cruz- who were arrested just for listening to the music of Los Aldeanos. “Hours prior, the streets were surrounded and the entrance of Holguin was closed off and various dissidents were detained, among them Caridad Caballero Batista and Esteban Sander,” recounts Marta.

Caridad Caballero and her husband Esteban Sander were released during the afternoon hours of May 25th after an arrest which lasted long hours. Repression in Cuba occurs daily, and because of the Boitel and Zapata Live On Protest, the repression has been carried out with more strength against peaceful dissidents.

These were only just a few stories of the repression, there are many other names and situations which must be told. However, Cuban dissidents continue their invaluable and dignified work, a fact that is perfectly captured in the words of Marta Diaz Rondon, “They are wrong if they think that all the beatings and mistreatment they give us are going to make us give in. We are going to continue fighting and we are going to continue taking to the streets until there are no more political prisoners in Cuba and until their exists freedom and democracy in our country“.

The Boitel-Zapata Live On Protest Culminates with Large Scale Repression